Why is the Green Jacket presented in Augusta “Green”? 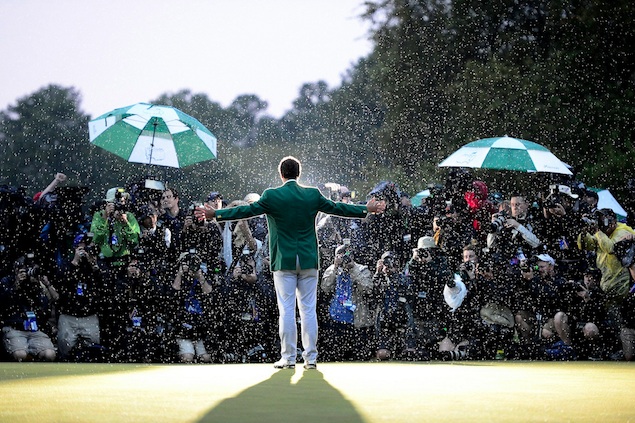 Answer: d. Because members of the club wore green jackets during the tournament so that fans in attendance could easily recognize them.

This tradition of the Green Jacket at Augusta National Golf Club dates to 1937.

“Bobby Jones and Clifford Roberts believed that members of Augusta National Golf Club should wear matching blazers during Tournament week so as to be easily identified by patrons who should happen to have questions. The club purchased the Jackets from the Brooks Uniform Company in New York and urged members to buy and wear them at the Masters.”

The Green Jacket became the symbol of membership in the ultra-exclusive Augusta National Golf Club. Slipping a jacket onto the winner of The Masters – a tradition that began in 1949, when Sam Snead was presented the Green Jacket for the first time –  symbolized that golfer’s entry into the exclusive club of Masters champions.

The winner has permission to take his Jacket home for one year before returning it to the Club when he returns for the Tournament the following year. The Jacket is then stored at Augusta National and made available whenever the champion visits.

It doesn’t matter who wins, when or how… They all have one thing in common,