“The USGA Handicap System™ enables golfers of all skill levels to compete on an equitable basis” – www.USGA.org

The Handicap system was developed to measure the potential ability of golf players and level the ground for them to compete. These potential ability is determined based on historical performance through what, in my opinion, is one of the most comprehensive methods to measure a player’s ability in all of sports. During this series of articles I won’t go into the details of the mathematical process, instead I will discuss the philosophy behind the system so you can understand why the system is developed in that way.

Below are the 4 principles that, in my opinion, dictate the design of the Handicap System

During this article of the series, I will share with you the principle of “Measuring Player’s Potential”. The remaining principles will be discussed in future posts.

As you probably already know, the Handicap is determined by using the 10 best rounds of the last 20 rounds a golfer has played. Which brings the question of why the best 10 and not the average of the last 20? or last 10? One could argue that the average ability is more representative of what the player is likely to shoot.

However, I actually believe that the decision of measuring potential ability instead of average ability is a pretty smart one. There are mainly three reasons 1) It reduces the intrinsic variability of a golfer’s historical performance, because golfers are more stable and focused when they are playing well  and 2) It generates more excitement in golfers (I would rather say I am 10 Handicap than a 14 Handicap). 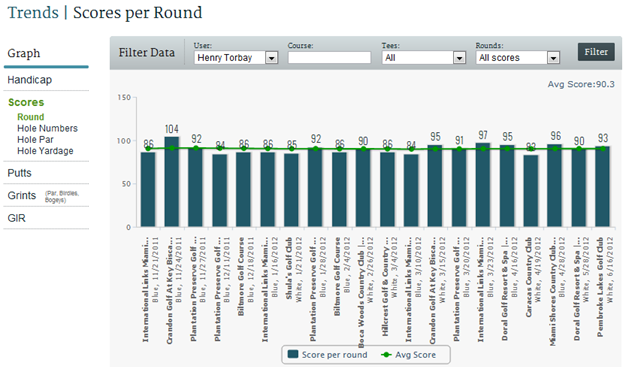 My brother is the typical once a week golfer with an avg. score of 90. In the Last 20 rounds  the highest score is 104 and the lowest is 83, resulting in a spread of +14 or -7 off the average. You can already tell that dramatically lowering your average is more difficult than dramatically shooting over your average (almost twice as much in his case).

This exercise shows how players are more stable and focused when they are playing well. Therefore, it show why potential ability is more accurate than average ability.

In soon to come articles I will explain the remaining 3 principles of the Handicap System. Let me know your comments at contactus@thegrint.com