Which is the Oldest Golf Course in the World? 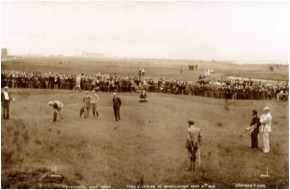 This course is recognized by Guinness World Records as the oldest golf course in the World. Evidence shows that golf was played in Musselburgh in 1672.

The Musselburgh Old Course is located East of Edinburgh.

This course had at the beginning 7 holes, then in 1838 the eighth hole was added and in 1870 the first 9 holes were completed for a Par 34. The four-and-a-quarter inch instrument used to cut the Holes in Musselburgh is still being required by the R&A to use in all golf courses around the world.

This course has plenty of stories and history. Hole number 2 is called The Graves; it has been said that this was a burial ground for soldiers who died in the Battle of Pinkie in 1547.  Apparently they were buried on Musselburgh Links to discourage golfers from playing there, because golf was frowned upon at that time. The 7th hole is called The Bathing Coach, this name came up because a bathing coach stood near the green for many years. The 9th hole is called The Gas, because of the gasworks situated behind the green; this hole has 9 bunkers in total and a long rough surrounding the Fairway making it one of the toughest holes of the course. And the current first hole was added in 1838, this was the eighth hole back then.

The Musselburgh Golf Course hosted six Open Championships between 1874 and 1889, and it is believed that Mary Queen of Scots played this course in 1567.

This is definitely a course to be played at least once in your life. It has more history than any other golf course in the World and a lot of things created and designed in that course are still used and implemented nowadays.

If you are looking for more information about this Historic Golf Course, you can go to