Golf Games – Where Your Golf Handicap Is Not Important…

Golf Games – Types of Games that can make Golf a little bit more fun, without worrying about your Golf Handicap. 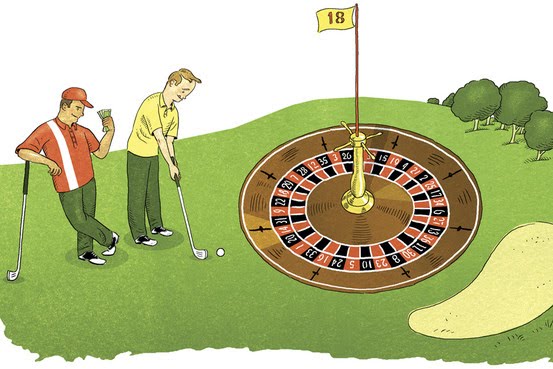 Did you know that there are more than just the few 2 or maybe 3 types of Golf Games that you have heard around or even played…?

There are many different types of Golf Games out there, and probably many that we don’t even know they exist; one thing we are sure about is that all are fun to play, and even more when money is involved… Oh, yeah, and your Golf Handicap doesn’t matter either.

We are going to describe some of the ones we like and tell you how to play them… and hey, maybe there are a few games out there that we don’t even know and you do… so please, if that is the case, share them with the rest of the Golfers reading this blog. We all like to have fun and change things a bit every once in a while.

On this first blog post we are going to tell you about these games: Bingle Bangle Bongle, Beat the Worst, Perfecto, Pennies and The Defender… But we have a few more that you will like and we will tell you about them in the next blog, so stick around.

These are Individual Games, meaning, everyone against everyone.

This game is played with Points, which can be defined as you like, but whoever has more points by the end of the Round, Wins. It can be played with 2, 3 or 4 players.

Bingle Bangle Bongle is a perfect game to play among everyone, it doesn’t matter what your Golf Handicap is. It is a game where the Handicap doesn’t have anything to do with the game. Here is how it works:

This is how the Points are earned:

And of course, the player furthest from the Hole always plays first.

This game is also played with Points. This one is a fun game and puts pressure on the Player who is on the “spot” because if the “Worst Score” is a low score, he/she has to play well. This game is played with 3 or 4 other players.

Just like the name says it. This game is about completing or hitting the Perfecto, which is:

If the player accomplishes the Perfecto, he/she earns 1 point and if the player finishes the Hole under par, the Points are Doubled. This game is played with 2, 3 or 4 players and the amount of Points can be whatever you prefer.

There are probably many different versions of this Game out there, but here is one that maybe you didn’t know, or maybe you were looking for something simpler and easier to count, which this might be it.

Whoever has the most points at the end of the Round, wins and it is played with 2, 3 or 4 players. Now, here is the thing, you can include (or ADD) as many “occurrences” as you like and change the amount of Points per “occurrence” as you like; these are just examples:

This game is played with 3 or 4 players and it is by Points as well, meaning… whoever has more Points by the end of the Round, Wins.

The point of this game is to Defend (win or Tie) a group of Holes that you will determine randomly before Teeing Off; it is easier if the order is kept in the same order as the Tee-off order on the First Hole.

These are it for now… Now you can go out and play something different with your Friends (or enemies) and have fun! Remember that it doesn’t matter if you have the worst Golf Handicap among your peers… you can still compete and win!

Oh, by the way… we are always improving our TheGrint Golf App (and Golf GPS). So, please let us know if having these kind of games is something that you would use. And if so, which games you would like to see included.

If you want more Games, stick around for the next Blog!

The fun isn’t over!