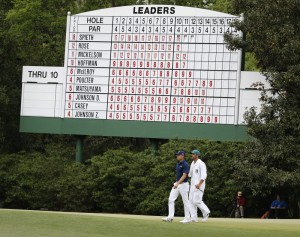 Sadly, the 2014-2015 Season is over but we have so many great memories of it that we can’t wait to see what the next Season has for us…

We thought it would be great to show all the Records that were broken (or tied) this Year… It was a great year in Golf and we feel it is just getting started.

Lets start with the World Number 1… Jordan Spieth. Now, this guy broke so many Records this Season, on the Golf Course and Money-wise as well… Very impressive Year for a 22 year-old. Lets break them down for you…

1. In total winnings this year (minus the $10 million FedEx prize), he made $12.0 million, which was $1 million more than the previous record holder (Vijay Singh).

5. Spieth is the youngest player to win two majors in 93 years.

6. He’s the youngest to win five tournaments in 86 years.

8. He won the Masters and Tour Championship in the same year. No one has ever done that before.

9. He tied the Scoring Record of Tiger Woods at the Masters with -18 under par.

10. He is the first wire-to-wire Masters winner since Raymond Floyd in 1976.

So, 12 Records (at least)… we might be missing some, but these are incredible! And certainly not easy to break again, but who knows… He might even break his own Records one day.

Jordan Spieth wasn’t the only one who broke a Record in 2015… World Number 2, Jason Day is up there too in the Book of Golf History.

Jason Day won his First Major Championship, the PGA Championship with 20-under par, breaking Tiger Woods’ record from 2000 of 19-under par.

And lets not forget World Number 3, Rory Mcllroy… He broke a few Records in 2015 despite missing a bunch of Tournaments due to that Foot injury he had.

Here are a few Records Broken by Rory:

3. Most PGA Tour wins by international player before 30th birthday; Gary Player had the Record with 10 wins.

Like I said at the beginning of this Blog, what an incredible year of Golf we have had and we are all sure that this next Season is going to be as good or even better than this one.

Hold on tight and enjoy the “Golf-Ride” this next Season is bringing to us.